Our weekly speaker series continued this past Monday, January 27, with a visit from Joel Russell, a land use attorney and planning consultant from Northampton, Massachusetts. This was Joel’s second visit to Conway this year, and he has a long association with our program. As of February 1, Joel is the new Executive Director of the Formed-Based Codes Institute (FBCI), and on this most recent visit, he presented on form-based code and its role in a growing movement to re-envision zoning code in urban design. 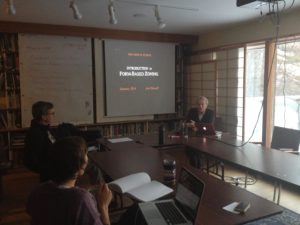 Form-based code (FBC) is an alternative practice to conventional zoning predicated on a fear of density that has left many of North America’s urban regions with a weak core, fragmented patterns of land use, and a ‘monoculture’ of ‘car-centric’ design. FBC, as Joel explained, looks to reverse the effects of zoning that is nearly 100 years old in practice, and instead embrace density and to revitalize the urban core, integrate land use, and create pedestrian, bike, and transit-friendly communities.

The key difference between FBC and typical zoning is that FBC emerges from the planning process, planning that includes public visioning in the form of charettes and other gatherings. There are underlying principles–placemaking, streetscape as an integral component of urban form, public spaces designed as outdoor rooms–but FBC is largely a process, a method for ‘mapping the community.’ Where an emphasis on architecture (often for architecture’s sake) or suburban notions of division of land use has driven zoning, FBC requires an intentional shaping of the public realm and urban form based on the aforementioned principles. The design of buildings, their physical use will respond to this form.

It may be of no surprise that FBC and the Form-Based Codes Institute is an offshoot of the Congress for the New Urbanism. The disciplines share many principles, and, in theory, both emphasize the use of a public planning process. FBC as a term has been in active use for about a decade and the FBCI is working to advance the practice by training designers and planners and seeking the implementation of FBC as legally enforceable ordinance. Joel told us about the Institute’s course offerings and a free Step-by-Step Guide for Communities. The discipline’s heavy emphasis on graphics in the actual code–maps, plans, and schemes that the public can digest–is an important part of what sets FBC apart, and for that reason alone should interest Conway students and alums!

Joel said that practitioners of FBC ask the fundamental question “Will the code produce integrated and vital urbanism?” His talk and our conversation with him afterwards made it clear that ecological designers have a role to play in shaping the future of FBC and urban design.

The fourth guest in Conway’s winter speaker series will be Nina Antonetti PhD on Monday, February 3 at 4:30pm.

Trevor Buckley came to Conway from Richmond, Virginia. He has a background in field work, agriculture, and farmer’s markets. His fall project was a green burial design in Chesterfield, MA and he’s now working with one other student on a rail trail design in southern Connecticut.