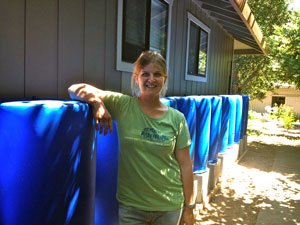 Jesse Froehlich ’08 thinks everyone should be able to harvest rainwater, so she set out to make that possible.

Six years after graduating from the Conway School, through a fortuitous series of twists and turns, Jesse Froehlich ’08 is entering her fourth year as an entrepreneur with her rainwater harvesting business. BlueBarrel, LLC (or BlueBarrel Rainwater Catchment Systems as it is known) is an online business selling customized kits for building multi-barrel rainwater collection systems using recycled food-grade, fifty-five-gallon barrels.

Jesse Froehlich ’08 with one of the rainwater collection systems she designed and installed.

The idea for BlueBarrel was born out of a community project that Jesse completed post-Conway. With an understanding of the principles of rainwater harvesting from CSLD and other coursework she had completed in sustainability and permaculture, Jesse was fortunate enough to get an assignment designing and building a fifteen hundred-gallon catchment system to collect rainwater off the greenhouse at Indian Valley Organic Farm & Garden in Novato, California—her first opportunity to actually install a system.

The result was a daisy chain of twenty-two recycled sixty-gallon drums, all plumbed together along the bottom in what turned out to be a uniquely functional approach. Because the barrels are underplumbed, all twenty-two barrels act like one larger tank, filling and emptying in unison with all fifteen hundred gallons of stored water accessible through a single spigot.

It was never her intention to start a business, but as Jesse found more barrels, she installed three more catchment systems at the house she was renting, continually refining the design, which is now known by BlueBarrel’s first trademark, the BlueBarrel Rainwater Catchment System™. 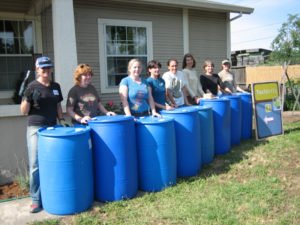 BlueBarrel partnered with the California group ToolGrrlz to put on their first workshop. Eleven women gathered to install a six-barrel system at a Fulton, CA home.

In 2011, Jesse and a couple of friends led an all-women’s workshop to install a 6-barrel system. One of the workshop participants asked to host a workshop at her own home engaging even more people, and from there the business grew.

Jesse’s vision from the beginning was to regularize the design enough to make it widely available as a mail-order kit. That vision became a reality in March of 2014 with the launch of a brand new website that takes customers through the process of sizing and siting their own BlueBarrel System, and ultimately customizing their own RainKit™ including all the components the customer needs to install the number of barrels they specified.

The key to BlueBarrel’s unique business model is a distributed network of barrel suppliers. BlueBarrel’s mission is to make rainwater harvesting accessible to more people, which they do by offering a price point that’s a fraction of comparable products. Because barrels are sourced locally to each customer—directly from the food manufacturing waste-stream—BlueBarrel has eliminated the massive expense and carbon footprint of manufacturing, storing, and shipping the bulky barrels. The RainKit with all the hardware for completing the design ships in a small box.

Jesse appeared on News 10 Sacramento in December 2014 to speak about the whats, whys, and hows of rainwater harvesting.

Reflecting on the journey from the Conway School through to the current joys and challenges of running BlueBarrel, Jesse appreciates the practical knowledge she gained in stormwater management at the Conway School, as well as the emphasis on presenting information clearly using words and graphics. These skills ultimately translated into a user-friendly customer experience, including an interactive website, photo-illustrated instructions and how-to videos. Though at this point a business degree would be useful, Jesse notes, the good news is that ultimately all lessons in business are learned the hard way… and that’s how Jesse learns best.

Jesse Froehlich ’08 thinks everyone should be able to harvest rainwater, so she set out to make that possible, founding BlueBarrel Rainwater Catchment Systems in 2012.