Dispatch from Mali: Part One

In June 2015 Conway students Molly Burhans ’15 and Chris Hendershot ’15 traveled in Mali, West Africa, visiting the site of their spring term student project. While there, they shared updates from the field. This is the first installment of two.

So far our experience in Mali has been

incredible. The landscape is stunning, and the people have shown us tremendous generosity despite the unbelievable hardships they face as part of their daily lives. One of the first rains that the country has seen in months was falling as our plane landed in Bamako. We departed the airplane and immediately had our temperatures taken, as a precautionary test for Ebola, and our documents examined. We saw Bintou Sissoko and her two of her children waiting in front of the airport for us. They gave us a warm welcome and we loaded everything into her SUV and took off towards her house in Bamako.

To western eyes, the roads in Mali appear chaotic, especially at night, as they are barely illuminated by dim street lights. We arrived at Bintou’s house and were shown our rooms, each containing a comfortable bed and an air conditioner. It’s pretty safe to assume that we had better accommodations than the majority of the local population. 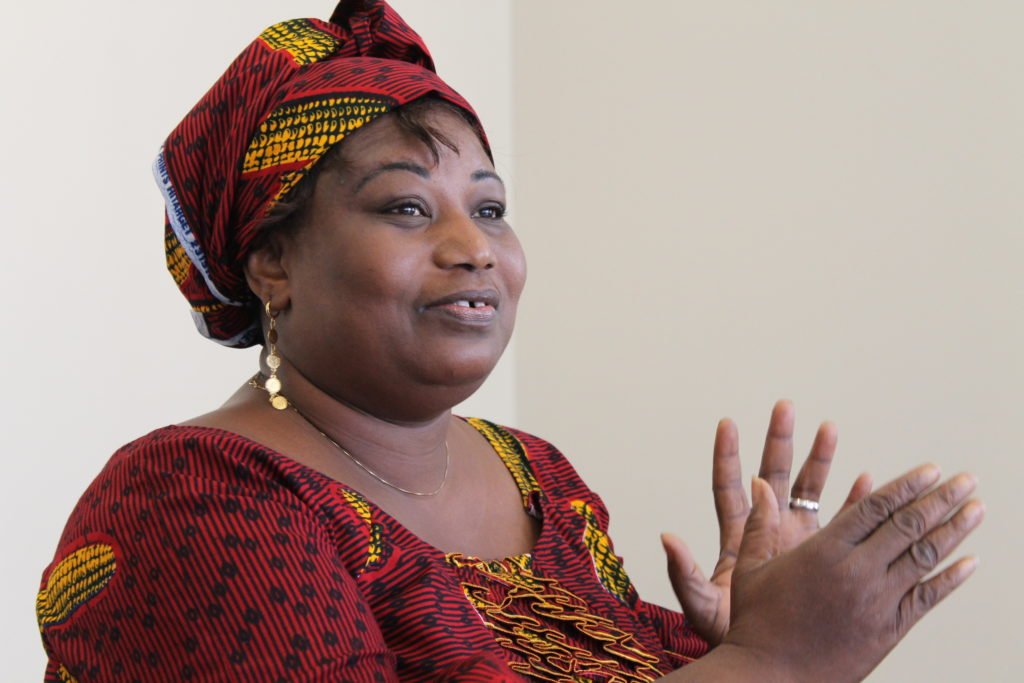 Mme. Bintou Sissoko, the founder and executive director of Mali Nyeta, a US-based not-for-profit organization, was born and raised in Kita. She has had a notable career as an educator in Mali, having participated in the launch of what is now an outstanding K-12 school in the capital city of Bamako.

We ate our first dinner and were quickly off to bed, as 24+ hours of traveling had left us beyond tired. Food in Mali is usually simple, but very tasty. Our days usually begin with a simple breakfast of bread, butter, juice, and coffee. Lunches and dinner have typically been some variety of rice, beans, meat, fish, and peanut sauce.

DAY ONE
Our first two days were spent adjusting to our new surroundings within the vicinity of the capital city, Bamako. This city of three million feels small and is spread out in a valley along both sides of the Niger River. Bamako feels small because its buildings are usually only two to three stories tall. On our first morning, we toured one of the schools that our host and client Bintou manages in Bamako. According to our other client Jinny St. Goar, the management and success of Bintou’s school in Bamako rivals many in the United States.

In just five years the school has grown into a full-fledged elementary school, and construction has already begun on an expansion for the middle school. The children have an enormous amount of energy and they would not leave us alone for a second. To their extreme delight Molly and I spent much of our time drawing, taking pictures, and reading with them. The staff enthusiastically showed us their classrooms, library, and computer rooms. 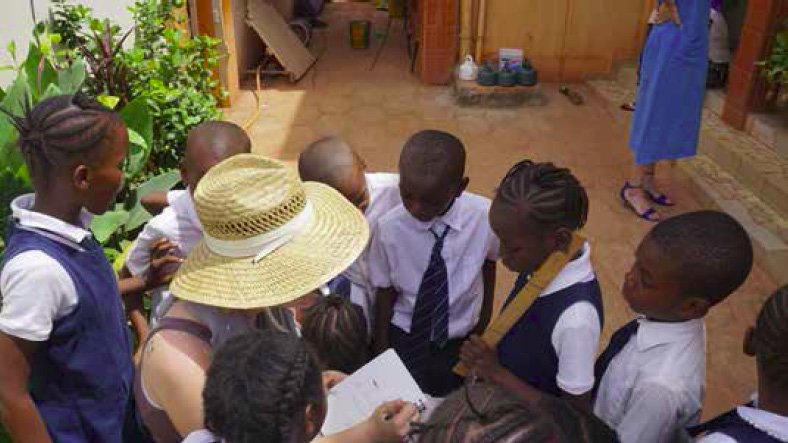 We had a simple, but delicious, lunch of rice with peanut sauce before leaving for an afternoon at the museum. We left Bintou’s school and ventured across Bamako to the

National Museum of Mali. We spent the afternoon exploring the various exhibits on Mali’s history and art. The exhibits which left the biggest impression on me were on Mali’s rich textile and woodworking cultural histories. Mali has a rich artistic legacy filled with vibrant patterns and detailed wooden representations of their spiritual beliefs. We were incredibly fortunate to have the opportunity to soak up some of the country’s cultural context first hand.

After a few hours we left the museum and went to one of Bamako’s biggest outdoor markets. The market was jammed with vendors of all kinds, selling a seemingly endless variety of medicines, goods, materials, beautiful handmade crafts, food, and trinkets. I have never experienced a place quite like the market in Bamako. Thousands of people moved throughout the space, and a couple of locals who happened to recognize our client, Jinny, gave us an inside tour. They showed us the way to a balcony which overlooked the market, as well as one of the most significant mosques in the country.

We wrapped up our first day with a delicious fish dinner and went to bed quite early.

DAY TWO
Our second morning was spent at Mali’s National Zoo. Unfortunately wildlife populations in Mali have experienced significant declines due to habitat loss and poaching. At the zoo we were fortunate to be able to see a wide variety of species, many of which are no longer present in the country. The zoo was actually quite nice and it was inspiring to see some organized conservation and restoration efforts in a country with so many other pressing humanitarian problems. We saw lions, elephants, crocodiles, leopards, chimpanzees, antelopes, and numerous kinds of snakes, birds, and other small mammals. After a few hours at the zoo, we departed and ventured over to the National Library, where we were lucky enough to be able to purchase a guide to the trees of the Sahel. The guide is written in French, but we hope that the scientific names and pictures will still be of use.

After a quick lunch back at Bintou’s school we packed up and headed south, out of Bamako, towards Ecova Mali. During the research preceding our trip we discovered the Massachusetts based non-profit organization Ecova, whose name stands for “Economic and Ecological Viability through Agriculture.” 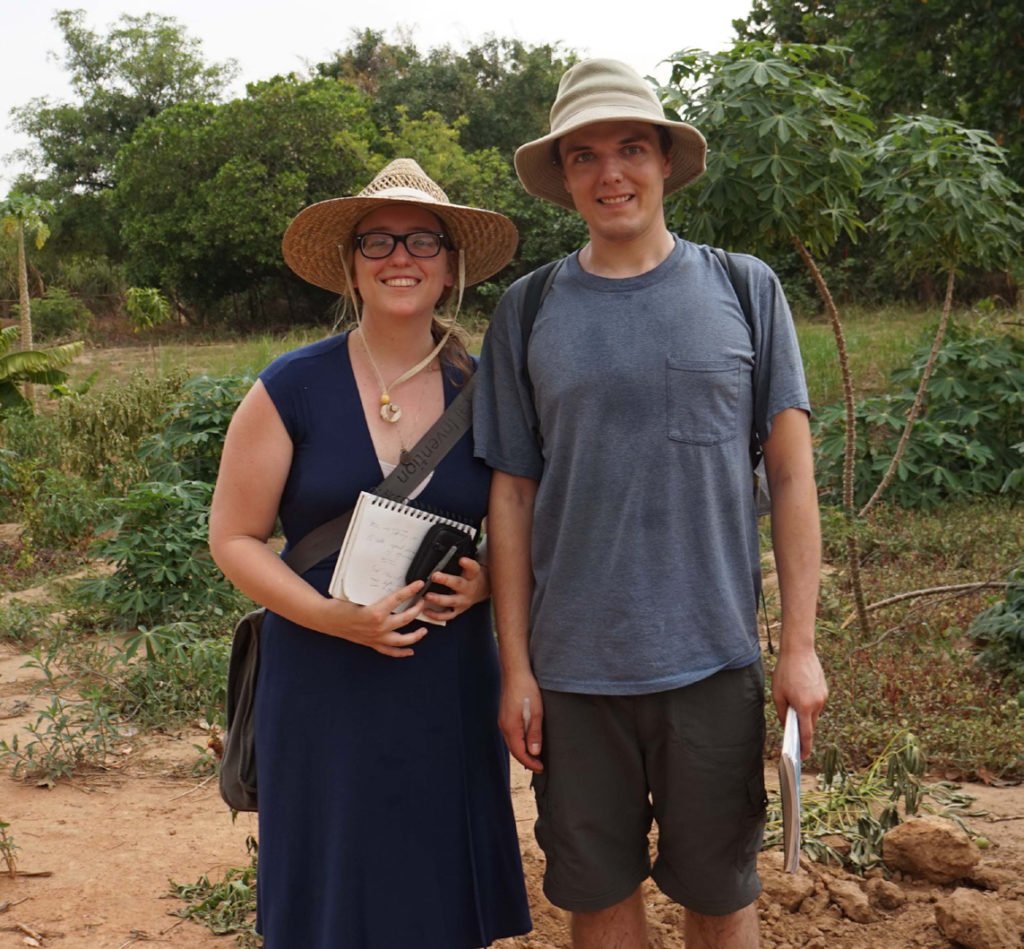 Molly and Chris at Ecova Mali. A papaya tree can be seen over Chriss’ shoulder, and an eggplant by his knee.

This farm was founded by two former Peace Corps volunteers, and we had been invited to tour their facilities. As we drove, the sprawling city of Bamako gradually gave way to rural savanna countryside. We turned off the main paved road to ask a few locals for directions, and before long we found the farm.

Yacouba Kone, one of Ecova’s head farmers, greeted us and warmly introduced us to the other farm. Ecova organically operates a very sophisticated, diverse farmer training center. Yacouba enthusiastically shared the farm’s planting strategies and water management techniques with us. We were all impressed with their ingenuity and attention to detail.

They grow a diverse array of perennial and annual crops together in an integrated system and the landscape has been modified to capture, slow, and sink as much water as possible. They utilize creative technologies to simply solve complex problems, such as using a foot-powered water pump to get water from a well for some of their farm’s irrigation.

It was an inspiring and productive visit, and we spent a long time discussing how Ecova’s agricultural and water management techniques could potentially benefit the villages we are working with. During our visit a thunderstorm gradually built up and just as we were beginning to leave, it started to downpour. As we left, Yacouba gave us a huge bag of freshly roasted peanuts from the farm. We made the drive back to Bintou’s house, had another incredible dinner, and packed our bags for the trip to Kita.