Greening the Crossroads of New England 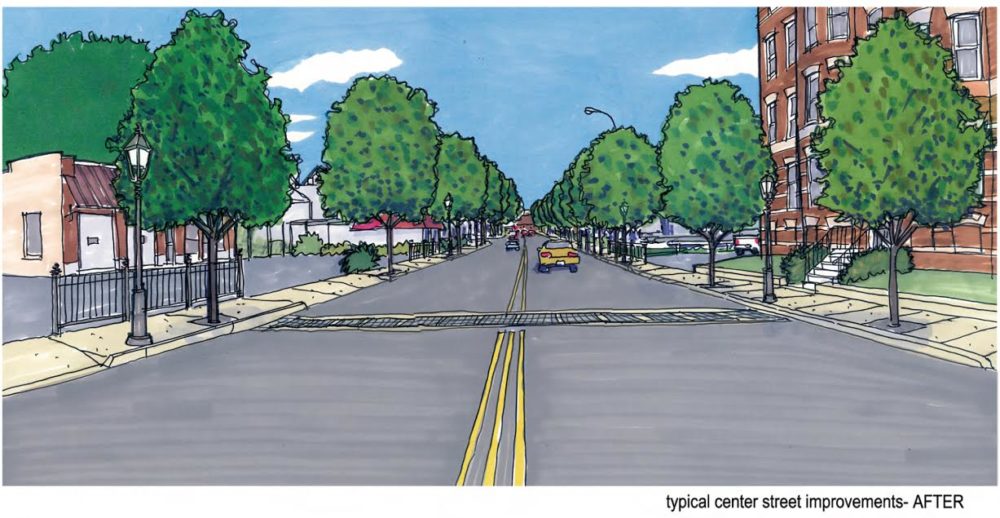 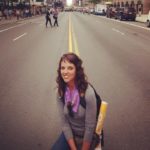 While attending the Conway School I became familiar with the City of Chicopee and its complex history. Two of my classmates, Rachel Lindsay and Beth Batchelder, were assigned their Spring project in Chicopee. After many weeks of observing their progress, I had a much greater awareness of this often forgotten old industrial town. Upon graduation I applied for an internship with the City’s Department of Planning and Development. While interviewing for the position, I quickly recognized that a deep respect and fondness exists for this small Gateway community, despite decades of post-industrial hardships. Among the Planning Department’s few employees, I am the only that has not grown-up and presently living within the City. The desire to shift the City’s reputation is a major concern for those who call Chicopee home.

Known as ‘The Crossroads of New England’, a diverse array of manufacturing during the late 20th century became a major component of Chicopee’s economic and industrial backbone. Since then, the loss of these manufacturing operations, the closing of the West Springfield Bridge, the downsizing of Westover Air Force base, and the creation of the Holyoke Mall only three miles north of Downtown Chicopee, have all reduced the neighborhood’s employment and economic power, siphoning off much of the local retail trade. The City’s Department of Planning and Development is currently lead by Lee Pouliot. Armed with a tenacious spirit, Lee seeks to bring Chicopee out of a dwindling past and into a bright and sustainable future. There is a lot of work to be done, and it has been a pleasure contributing a helping hand. 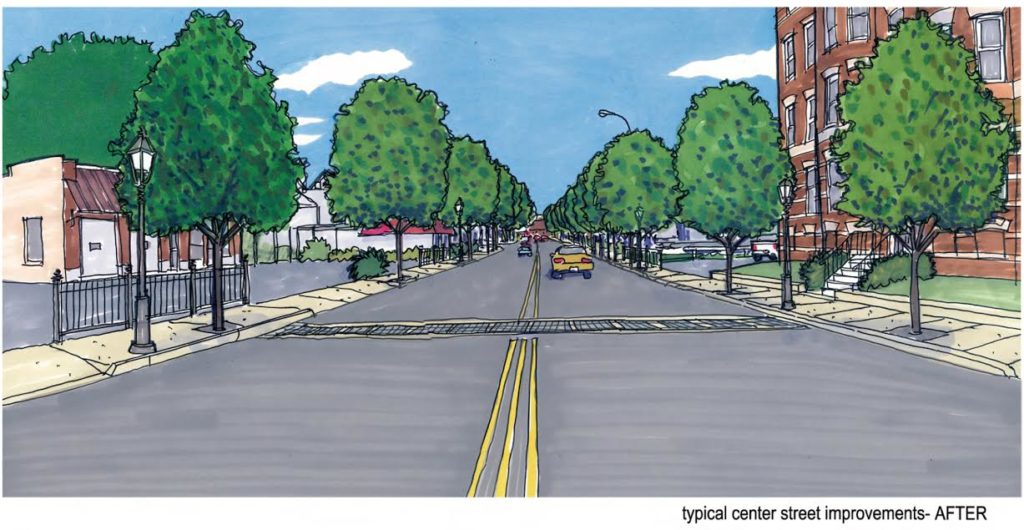 The new vision for Chicopee includes adding street trees that will provide both environmental and social benefits for the city’s residents.

Since my internship began in August I’ve drafted a landscape design for the City’s most beloved German restaurant’s parking lot, compiled a grant seeking funds to address Chicopee residents’ desire for increased job security while enhancing the resources necessary for those who lack basic amenities such as affordable childcare and reliable transportation. I wrote a Request for Proposal, inviting bids from qualified contractors interested in the clean-up of a former gas station located within Chicopee’s historic district. My current focus has been assisting in the organization of planting over two-hundred bare-root trees, granted by TD Bank with the assistance of The Arbor Day Foundation.

According to the Department of Conservation and Recreation (DCR), the ideal tree canopy for a city is 40%. Chicopee has a cover of 33%, there are currently 5,805 trees within the City’s limits. While most of these trees are private, the number of public street trees are lacking in Chicopee. There are currently 8,915 planting sites available. The Chicopee Department of Planning and Development hand selected over 200 trees, remaining mindful of species diversity, limiting the potential for future blight outbreaks. If disaster did strike, it would cost the city of Chicopee 28 million dollars to replace all of the street trees in Chicopee. The benefits of having more trees in Chicopee include: the mitigation of 11.7 million gallons of stormwater, noise reduction of 2 decibels for residents and businesses along roadways and reduced road maintenance due to shading. In addition, a little over 10% more money is spent in districts with more trees. Additional trees can add to the City’s green infrastructure, while creating a more appealing gateway to downtown Chicopee. 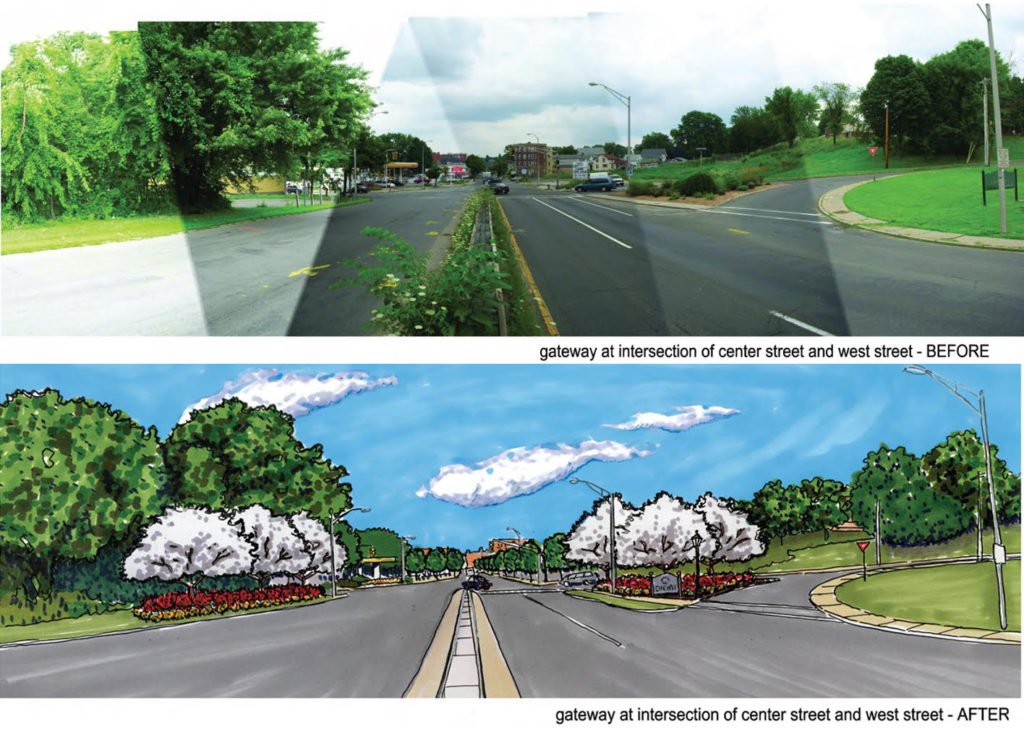 A rendering of the possible transformation for the intersection at an entrance of Highway 391 near downtown Chicopee.

The City’s greatest tree-planting hurdle has been a general feeling of resentment from residents who view trees as a burden.This outlook is chiefly provoked by memories of heavy snowstorms and subsequent property damage. Calming the nerves of these Chicopee residents, whom have a deep seeded negativity regarding public street trees, has been no easy feat. However, without question, the declining condition of the core commercial district represents the critical issue most often cited by residents and City leaders alike. Empty and under-utilized storefronts, lack of daytime and nighttime activity, lack of marketing identity, and an inadequate number of businesses capable of drawing non-residents to top of the list of concerns. Providing enhanced tree cover will not only benefit the City economically, but socially too. We all know that trees enhance quality of life, but the Planning Department’s greatest task is to engage residents who are not as easily convinced. 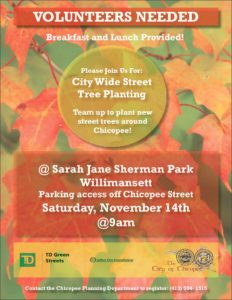 For those that are interested in volunteering, the City of Chicopee needs your help! On Saturday, November 14th, the Chicopee Department of Planning and additional members of City Hall will be volunteering their time to plant many trees, with the intention of improving the future of Chicopee. The City needs more volunteers, and we hope that more interested individuals will sign up for a day outside, improving upon the city’s green infrastructure, economic value and quality of life. Please join us!

Register here to join Jillian Ferguson’15 and other volunteers for a day of tree planting in Chicopee, MA on Saturday, November 14.