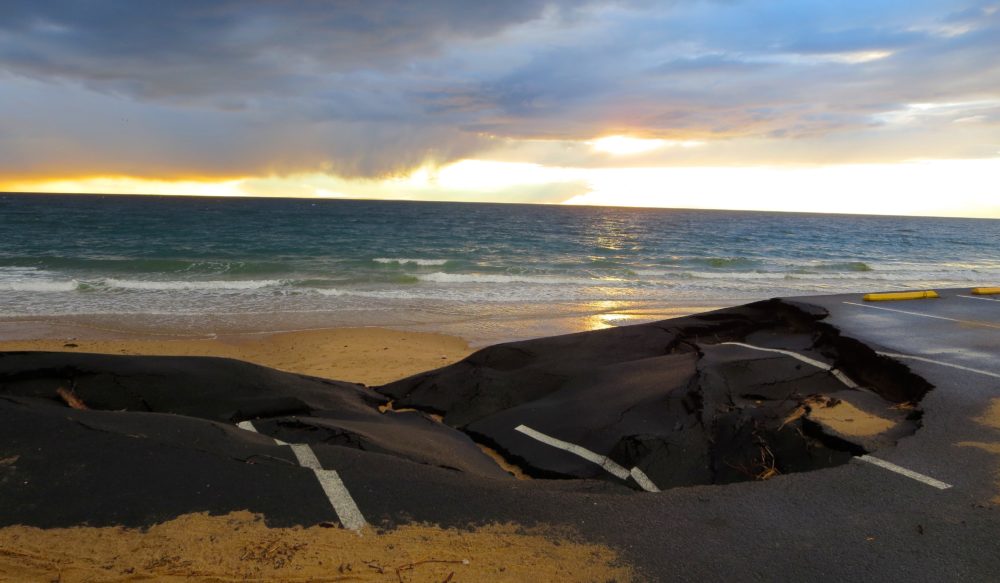 This piece, by Robbin Peach ’78, was featured in the 2017 issue of con’text magazine. Image above: The parking lot at Herring Cove Beach in Provincetown, Massachusetts has succumbed to storm surges over the years. The town plans to rebuild it 125 feet farther from the beach in 2018. Photo by Rachel Lindsay ’15.

Post-tropical cyclone Hermine headed north from North Carolina in September 2016 and stalled off the coast of New England. My days became filled with anxiety. As program manager of resiliency for the Massachusetts Port Authority (Massport), I am responsible for ensuring that Logan International Airport and the Port of Boston’s critical assets are resilient to flooding and other disruptive forces. Over the last three years, since the program at Massport was created, staff and consultants have run predictive flood modeling, identified the most essential assets for Massport’s daily function, and installed both permanent and temporary flood barriers to protect them. By 2016, we had comprehensive operational flood plans in place that outlined the details for what has to be done, by whom, and when, in the event of a significant flood. We had practiced interdepartmental tabletop exercises that were co-facilitated with the Massachusetts Emergency Management Agency to prepare for a hypothetical storm. We were watching and communicating continuously about the track of Hermine. Yet even with all this preparation behind us, there was good reason to be concerned.

Massport’s world-transportation network, including three airports and significant maritime properties in the port of Boston, connects New England to the world and promotes the regional economy through its operations. Logan International airport alone provides $13.3 billion annually to the New England economy. Port security, however, is increasingly threatened by human-made events and climate-induced changes in the environment, and nowhere in New England are natural threats more apparent than in coastal urban environments. Surrounded on three sides by water in Boston Harbor, Logan International Airport and Massport’s maritime assets are extremely vulnerable to a climate-induced increase in storms, flooding, storm surge, and sea level rise.

The vulnerability of Massport’s property is further increased by the fact that much of it lies on infilled land that was once open harbor. In Boston, most infilled land is more vulnerable because it is both closer to the water and the infilled elevations are not adequately high enough to accommodate future sea level rise and increased storm surge. Consequently, during a storm surge and sea level rise, the in-filled land actually acts as a buffer to the higher land behind it! The highly vulnerable location of Massport’s property contributed to its becoming the first airport in the nation to devote its own funds to implementing a comprehensive resiliency program. For Massport, “resilient” means able to get back to business as usual as quickly as possible after a disruptive event, and limiting any failures to prevent them from rippling across functions. Resiliency, sustainability, and emergency response are critical cross-cutting initiatives, but not interchangeable terminology. 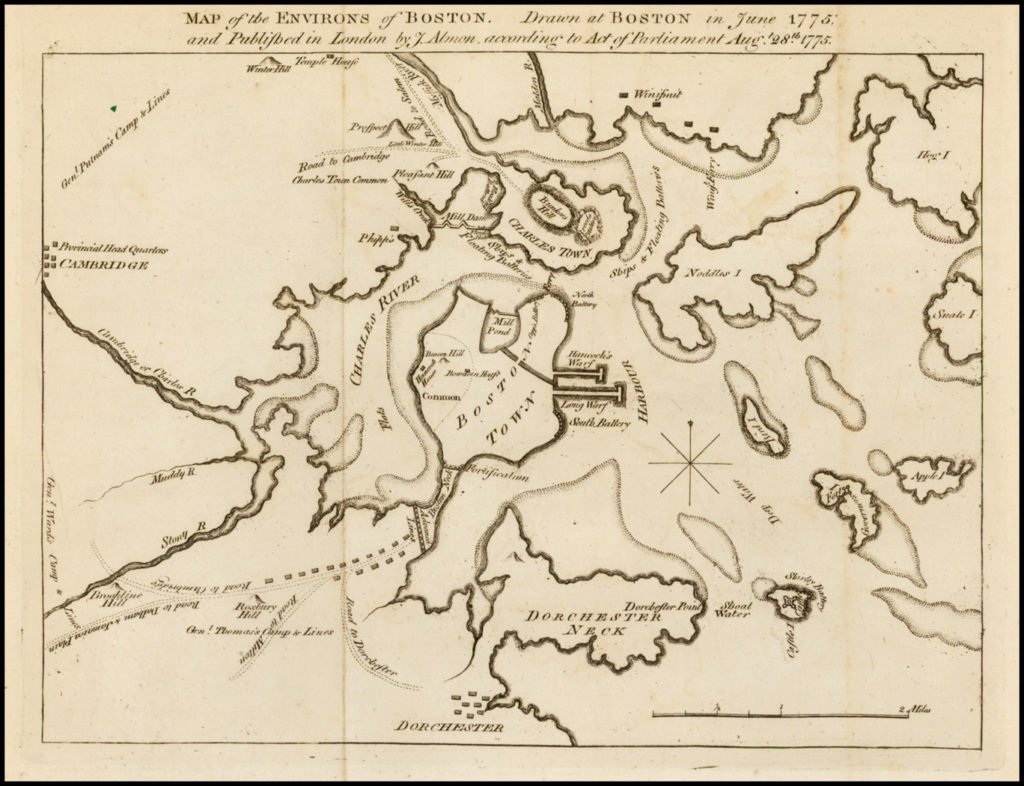 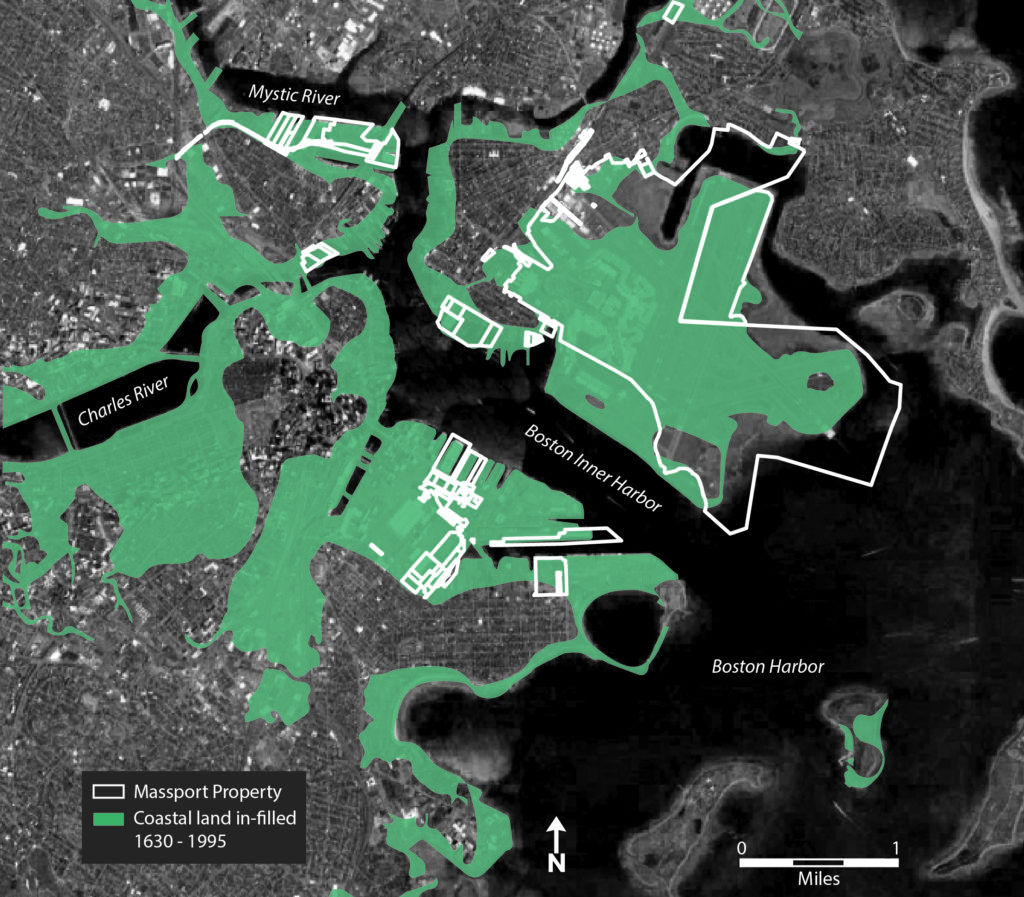 Boston was founded in 1630 on a narrow peninsula that totaled 487 acres. By 1880, infill development had more than doubled the area of the city. Today, the city occupies 57,360 acres of original, inland, and infilled land. A large portion of MassPort’s property is built on the infill areas, increasing its vulnerability to sea level rise. Image: The Conway School; data from Boston Planning and Development Agency and Google Earth.

For planners and designers of the built environment, climate change will increasingly be a factor in the design-build equation. Boston’s relative sea level has risen 11.8 inches since 1900 (the peak of in-fill development in the city), and sea levels are predicted to continue to rise three to six feet more by 2100. In the northeast, more than a 21 percent increase in precipitation is expected. Extended, extreme temperatures will likely increase in frequency and intensity. Across the region, aging infrastructure, eroding coastal protection, and our existing energy and transportation systems are already stressed. Improving the resiliency of these infrastructural elements will tax our collective imagination, but will also present opportunities for visionary design and planning. The strategic thinking and planning skills honed at Conway are necessary components in a design process that encompasses both how we address climate challenges, and what we design for the built environment. We must convene stakeholders to strengthen our understanding of threats and vulnerabilities, conduct robust research and share knowledge, and plan collaboratively and interdependently while we work toward hardening our existing infrastructure and incorporating resiliency into the design approach for future developments.

Since the resiliency program’s initiation in 2012, sound scientific research and principles have informed changes in our operations and policies that have cost over nine million dollars in analysis and capital improvements. Of those funds, approximately 20 percent were spent on studies, planning, and predictive modeling; another 10 percent were spent on the temporary flood barriers; and the remaining 70 percent on permanent infrastructure improvements. The improvements included installing custom flood-proof doors, upgrading emergency power systems, and installing water level sensors. Our goals are to improve the resiliency of the overall infrastructure and operations, increase our ability to restore operations during and after disruptive events in a safe and economically viable time frame, and to create robust feedback loops that inform new solutions as conditions change. These are also sound planning and design principles for any land-use or capital project. 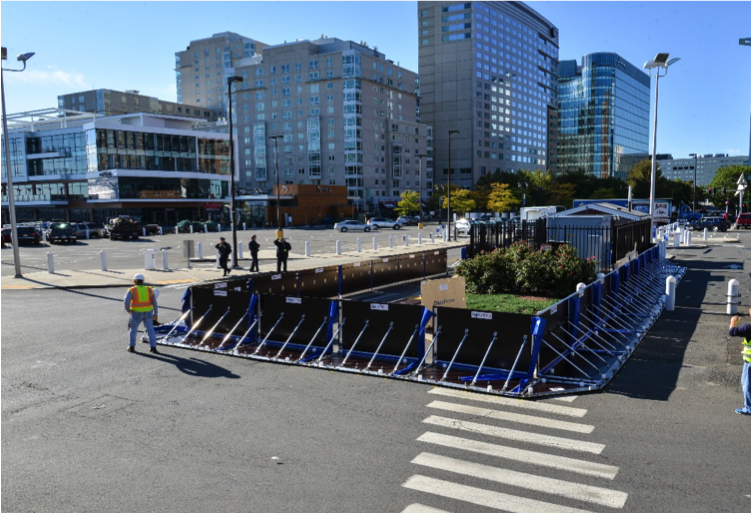 Design approaches to increasing the resiliency of our communities differ widely in technological complexity. The temporary marine-grade laminate panels around the police building at Massport, above, snap together and are engineered so that the floodwater pressure consolidates and strengthens the system. They can be deployed quickly before a pending storm—eight people can assemble 150 linear feet of 4-foot panels in less than an hour. In contrast, a man in a coastal community, below, photographed by Gioia Kuss ’99 while on her David Bird Service Fellowship in Mastatal, Costa Rica, protects his house with sandbags and a living barrier of coconut palms and sea-almond trees. 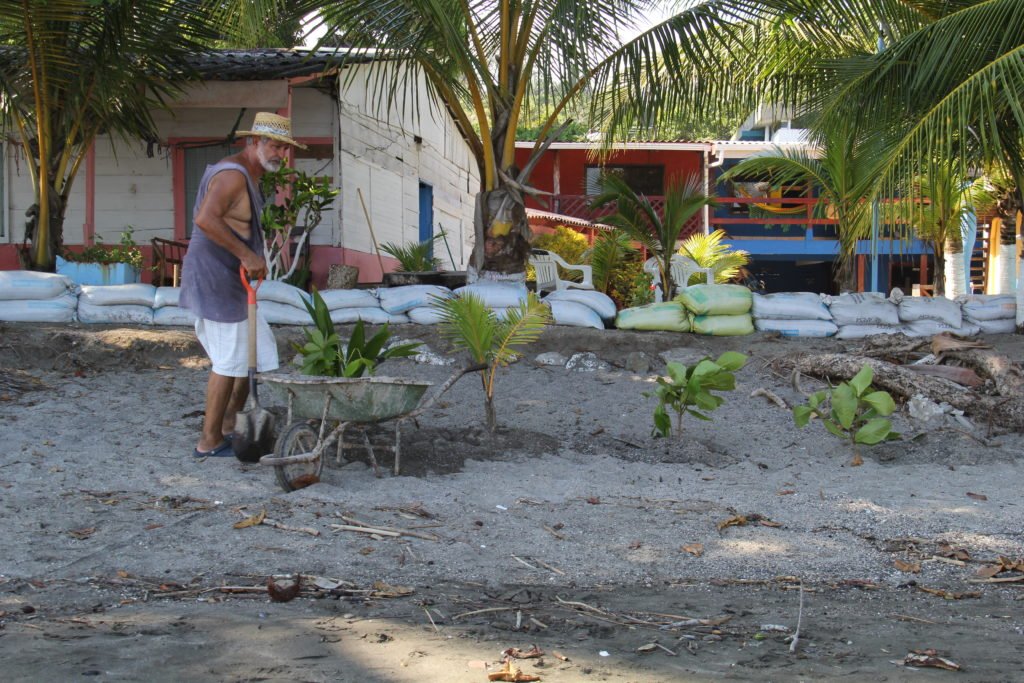 Investing in making our infrastructure more resilient should come in tandem with mitigating the causes by reducing greenhouse gasses. In 2001, Massport began a 15-year initiative to keep nitrogen oxide emissions at Logan airport at or below levels recorded in 1999. Logan airport now has two LEED-certified buildings (one was the first LEED-certified airline terminal in the world), and Massport operates a fleet of compressed natural gas shuttle buses, which reached their 12-millionth clean air mile in 2008. As part of its commitment to sustainable building practices, Massport recently repaved a runway with “warm-mix” asphalt, saving 200,000 gallons of diesel fuel, 2,000 tons of carbon dioxide, and 26.4 billion BTUs over conventional paving practices.

Given the results of the recent federal election, it is unlikely that this type of climate change mitigation will be addressed on a national scale in the near future. This makes our collective work on preparing ourselves to be climate resilient even more necessary. Massport has had the luxury of having both the resources and political will to conduct extensive studies and implement capital improvements, but this work can be done at any scale. Green infrastructure such as green roofs, urban forests, and water conservation technologies like rainwater harvesting systems can be implemented at individual and community sites or at a regional scale. Projected extreme temperatures and “urban heat islands” due to climate change can be addressed through cooling from increased tree canopy and open, permeable space. Better management of storm-water run-off, storm-surge protection, and flood prevention can be managed with green spaces, wetlands, permeable surfaces, and berms. Many of these design elements are adaptive, appropriate for projects with fewer financial resources and in other parts of the world, and can be customized to serve dual purposes—such as a green park that absorbs excess precipitation while also providing a space for passive recreation.

By chance, most major storms to hit Boston Harbor in the last decade have happened during a low tide cycle. If Hurricane Sandy had hit Boston at high tide, significant New York-style flooding would have occurred. Luckily for us, Hermine was not the superstorm we feared, and subsequent storms, such as the recent Hurricane Matthew, have missed us altogether. Nationwide, Hermine caused three deaths, inflicted widespread property damage, and knocked out power to hundreds of thousands of people from Florida to Virginia, inflicting total economic damages close to $1 billion. However, damage in New England was minimal, affecting mainly Eastern Massachusetts and Cape Cod with downed trees, branches, power lines, and light poles.

We cannot rely on chance low tides to protect us into the future. Our opportunity to have a positive impact lies in the broad application of resiliency planning across scales and design fields. Through its resiliency program, Massport hopes to model a planning process that both heightens our collective overall security and influences the global discourse on resiliency in the face of climate change and other national security threats. The reports, resources, and design guidelines we publically share on our website are designed to encourage broad adoption of the strategies we employ, and to encourage others to ask the right questions that lead to site-specific solutions. What are the most relevant projected climate threats? How can we best address them in an adaptive, sustainable, and economically feasible manner? By answering these questions in the best way possible in our work, we will help to build resilient, healthy, sustainable communities—which is not only a wonderful aspiration, but also a critical and pressing need. 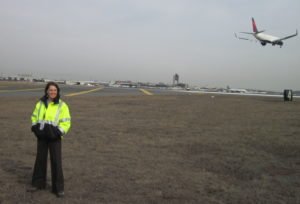 Robbin E. Peach ’78 received a graduate certificate in 1978 and, in 1985, a master’s degree from the Conway School. She also has a master’s degree in public policy from Harvard’s Kennedy School of Government. She worked at Massport as the founding resiliency program manager from 2014 to January, 2017. She has served on Conway’s board of trustees, has lectured at the school, and remains an ardent Conway fan.