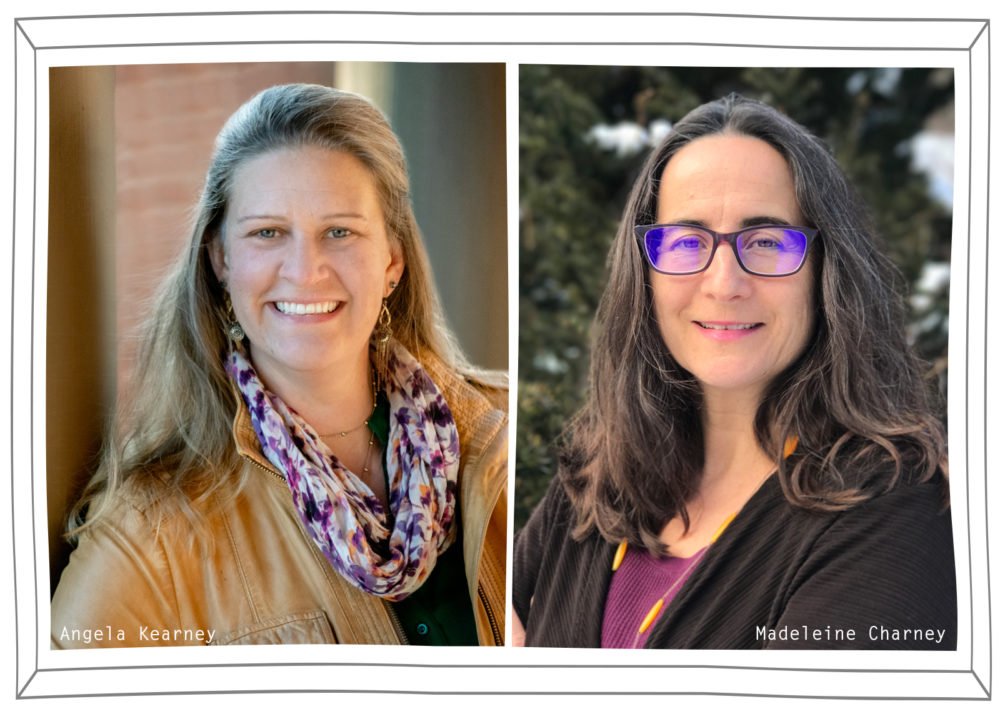 by Madeleine Charney ’03 and Angela Kearney ’03

To Witness and Stabilize 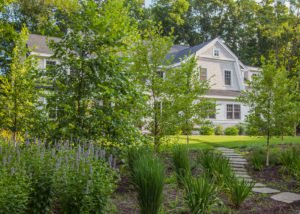 The winter of 2018 was setting in and Class of 2003 graduates Angela Kearney and Madeleine Charney were both facing a host of daunting tasks. Angela led a fairly structured life filled with projects for her design-build business Minglewood, LLC and her job with the Town of Lincoln’s Conservation Commission. However, her family and home life were shifting dramatically as her father had recently passed away; she was managing his estate while simultaneously transitioning away from her day job and expanding her business to include interiors. Looking back on the emotional and physical weight, she realized that having a like-minded, familiar person witnessing these transitions was an unspoken desire of hers.

Madeleine was blessed to be entering a six-month working sabbatical. She would be developing and delivering a training for librarians around New England called “Facing the Future: Facilitating Climate Change Conversations in Your Library.” She was also writing a chapter about the experience in Libraries Promoting Reflective Dialogue in a Time of Political Polarization alongside co-editing two books, Recipes for Mindfulness in Your Library: Supporting Resilience and Community Engagement and Going Green: Implementing Sustainability Strategies in Libraries Around the World. However, she felt shaky about the lonely hours and long to-do lists stretching ahead and was seeking a stabilizing influence on her journey. 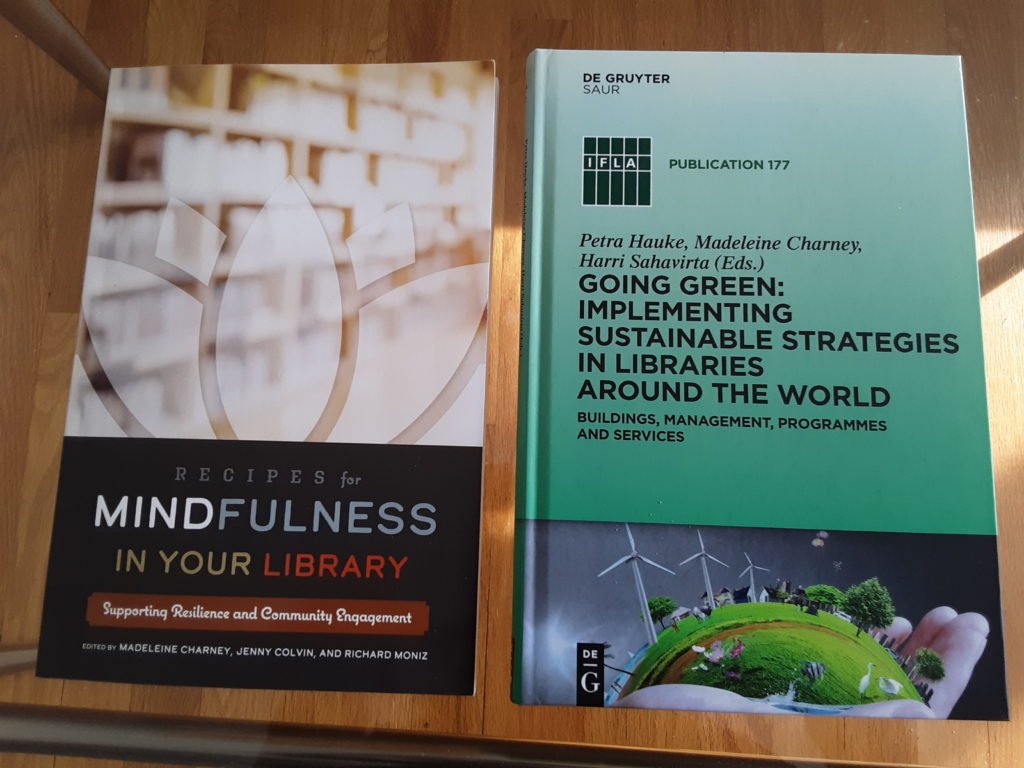 Two books Madeleine Charney ’03 edited during her sabbatical: Recipes for Mindfulness in Your Library: Supporting Resilience and Community Engagement and Going Green: Implementing Sustainability Strategies in Libraries Around the World

CoJourn is a personal growth and goal achievement program that pairs people seeking more external accountability, connection, and support as they pursue their big goals and dreams. When Madeleine asked Angela to consider being her “accountability partner” Angela replied enthusiastically. CoJourn provides a split spreadsheet into which you plug an overall intention, yearly goals and life goals. For weekly goal setting, Angela and Madeleine chose to categorize their goals under: Work, Spiritual/Personal, Home/Family, and Professional Development/Activism. They agreed to meet every Monday (by phone or Zoom [an online video conferencing tool]) from 1:00-1:30. Before launching their buddyship, they rendezvoused at a pub equidistant from their Massachusetts homes. Heather Nichols-Crowell (also Class of ’03) happened to be in town from California and joined them to witness their signing of the CoJourn-supplied contract (and drink craft beers). They set out without a defined number of months in mind, deciding to wrap up after four and a half months (partly influenced by Madeleine’s departure for a three-week family trip). By then, most of their projects had been completed and the rhythm of their goals was in steady motion.

An excerpt from the spreadsheet Madeleine and Angela used to track their intentions and goals.

One year after the start of their Cojourn experience, they sat down over coffee at Madeleine’s house to revisit their spreadsheet. It was satisfying to see their many accomplishments laid out before them. Beyond just getting things done, Angela shared, “The Cojourn experience pulled me right back into a Conway mindset. This would not have been true with just anyone in my social or work circles. Madeleine and I have a very similar way of thinking even though we’re in totally different fields. Our weekly exchanges took my work and personal life to a higher level rather than simply being project based. There was a bigger, more meaningful context around which I carried out my goals.” Madeleine was struck with how Angela served as a vital sounding board for her to practice her public speaking around the sticky issue of climate change. She shared that, “Having regularly scheduled time with Angela alleviated a lot of undue stress. I could run through my main points or areas of concern, honing and polishing them, before I set out to deliver the next library training.”

Angela and Madeleine are contemplating ways they might continue tapping into the wisdom and practicality of their Cojourn experience. They are considering checking in every month or so with an annual in-person review. They also thought about ways other Conway graduates might make use of Cojourn, such as forming a group, rotating buddies, or creating a pool of available buddies, including new grads or all graduates ever. The Cojourn website hosts their free partnership training videos and their “Pay What You Decide” model includes the option to sign up for free and pay later (if at all). Co-founder Molly Keehn offers free group launches, in person or via webinar and reports that, “she would love to have the tool in the hands of more people doing important work such as environmental protection and activism.” Madeleine and Angela invite questions from anyone about their Cojourn experience. Madeleine: greenzinnia@hotmail.com Angela: angela@minglewoodllc.com 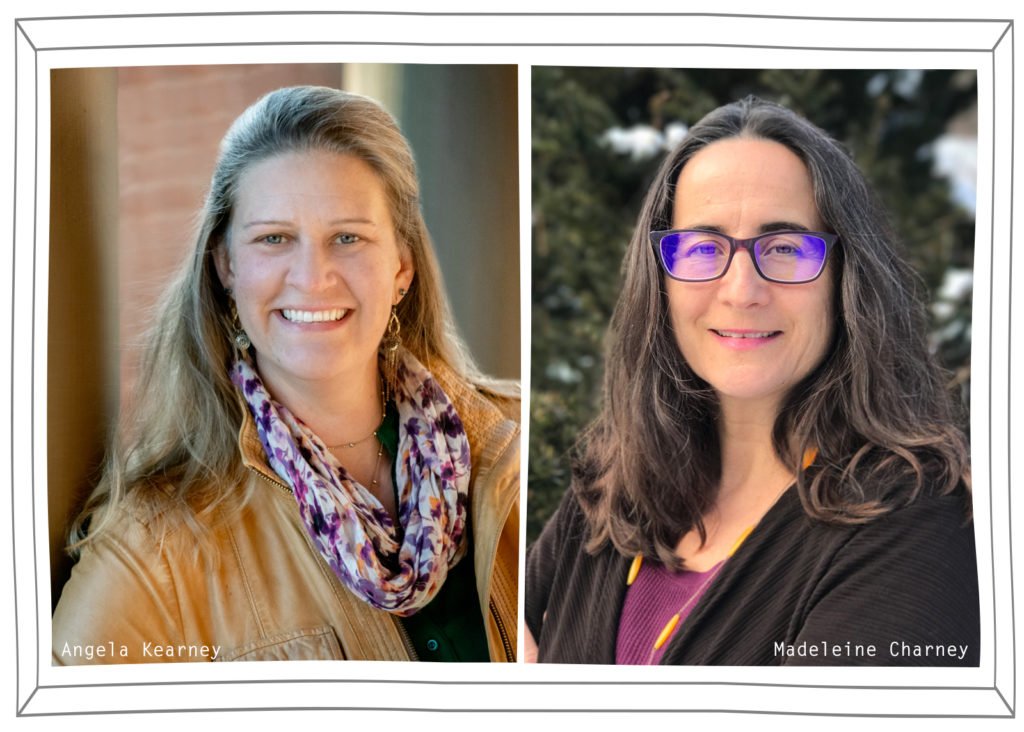 Angela Kearney (at left above) is the founder of Minglewood, LLC, a design-build firm dedicated to creating meaningful interior and exterior spaces within their physical and cultural context. Her passion is designing and building zen-inspired places that focus on people, the environment and their interconnectedness.

Madeleine Charney (at right above) is a Research Services librarian at the UMass Amherst Libraries where she supports the departments of Architecture, Landscape Architecture, and Regional Planning; Sustainable Food & Farming and Arboriculture & Community Forestry programs. Her areas of interest include food systems, permaculture design, and contemplative pedagogy as it relates to librarianship. She also facilitates labyrinth walks for individual, professional and societal transformation.