Richard Williams, who taught the humanities portion of the Conway School curriculum from 1979 to 1987, died at age 92 on April 18th following a long illness. Four people reflect on their memories of Richard, whose impact still informs their work. 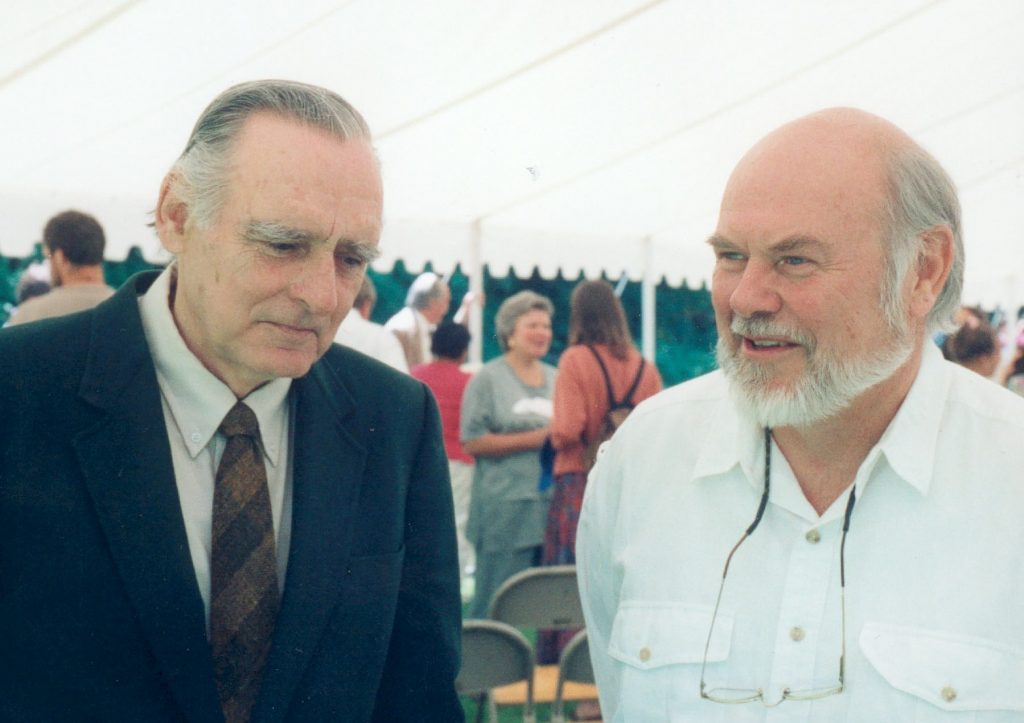 Richard Williams came into my life, as so many outstanding people did, at a time when the search for meaning was front and center for me. For Richard, the meaning—the  understanding—is what counted most. Right from the onset, Richard’s quiet, considered manner and his compelling questions impressed me in many ways. He joined the Conway faculty in the task of exposing the greater relevance of fitting human use and needs to the more natural and fragile earth. His regular perceptions demonstrated an empathy and enthusiasm for what the school was attempting to do educationally.

Richard somehow managed to articulate the true importance of what we were saying, thinking, and doing, always in a calm, measured, and ground-tethered manner. His questions, initially spontaneous, would spur more deliberate thinking and were always illuminating. I remember many moments, sometimes late into the evening, sitting with him and pondering the core of our teaching. Staff and students alike rarely missed his lectures. We were all learning and growing, being sanctioned by his lessons.

Anchored in Aristotelian logic, Richard believed in universals as touchstones for so much of what we think and do, and was able to identify them in his weekly conversational lectures. Richard had ears for wisdom, no matter the source. He was a true humanist.

While calm introspection is essential to greater or deeper self-understanding, an equally important practice is to engage the world and do so deeply or broadly as well. Most of us select a career path or discipline, a craft or art form, to help us both narrow the focus and look outward and around us.  Since it entails a synergistic and inclusive set of skills, the design professions deserve to be taken seriously.  Landscape design deserves greater reverence, more believing practitioners, and more discerning clients.  Of this Richard was sure!

I have spent much of a now long career attempting to place a capital D on the word design, and was assisted in more ways than I can ever remember by Richard’s encouragement, his astute questions and modeled calm reflections.

Richard Williams, the early CSLD speaking/writing instructor and philosopher, mesmerized students (and staff) with his weekly presentations and daily assistance with all things mental and descriptive. 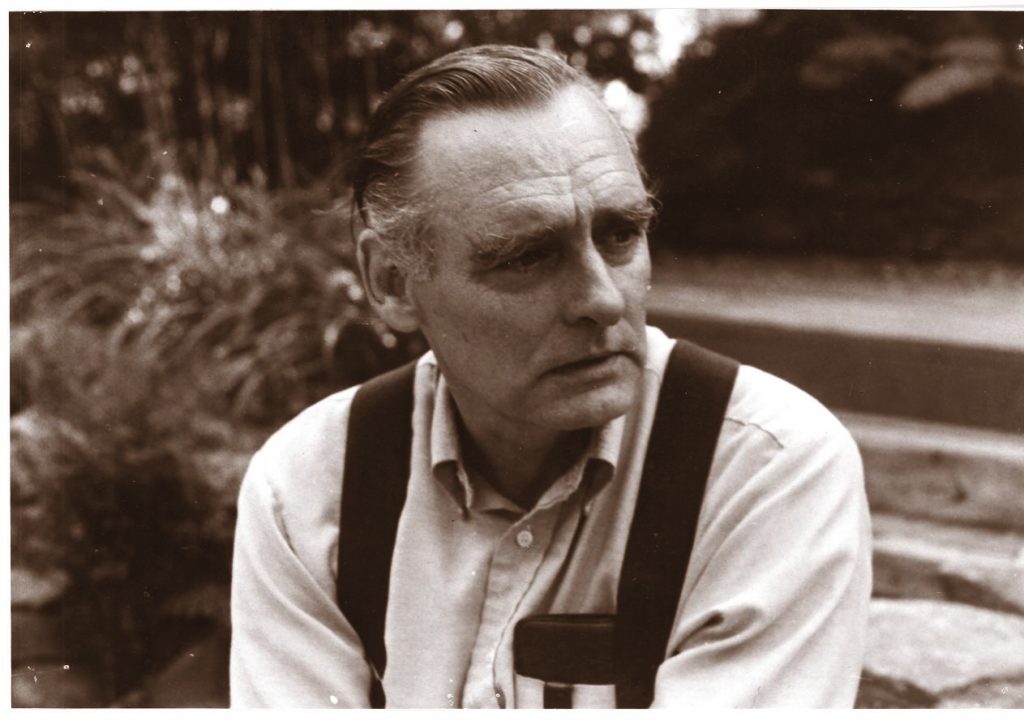 Richard sitting on the steps of the Delabarre Avenue campus

Richard suggested that the titles Landscape Design and Landscape Architecture be revised to Exterior Design: “Landscape ties too closely with painting, picture, scenery – one who prettifies.”

Design is not a graphic art or a visual image; these are but expressions of design. It is not a set of manipulative techniques, not a particular subject matter discipline. Design is the formative principle by and through which anything attains the degree of reality it enjoys. Beyond design there is nothing, nothing, that is, except the act that is made possible and sustained by the design itself. The design of a Monday morning’s breakfast, set of clothes, and system of transportation, may be perfect or imperfect; if imperfect, the larger design of the day begins badly—in indigestion, say, and chill, and in being late for work. Arranging these things and the day’s schedule are acts of design. Reality is an act of design. So is a landscape.

I’m suggesting we are engaged in a most worthy profession having a life-enhancing role; if we can come to value the higher calling, the love of land and people that individuals can hold, we are in a position to convert our professional mission to practical results, an inclusive mission would support individuals, community and certainly the environment upon which we depend. It is not as if we don’t know this already, but it is that we do not take ourselves seriously enough. We need to take ourselves seriously to enable those we serve to take us and themselves seriously. I believe that we do have a chance to operate as a more compelling, more relevant force in ‘Quality of Life’ issues. We are a profession that helps connect all levels of our existence from spirit to soil and our profession encompasses the best parts of our humanness.

One of his instructive documents which I believe will speak to current students and others is the following:

With regard to writing: I have discovered one bit of advice that has enabled several students to get ‘unstuck.’ They fixate on an essay, thinking that they can’t go forward until it’s perfect. I’ve simply encouraged them:

I’ve been surprised at how this frees them from burdens of ‘perfectionism,’ trying to finish a bit of work they are evidently unable to finish as yet. They start looking forward to next attempts rather than locking in on current dissatisfaction.

Richard Williams was an early and, I hope, continuing influence on the content and direction of the Conway School of Landscape Design. I recommend that his notes and documents be collected, made available, and referred to.

Don’t overlook how he explained and applied Aristotle’s Four Causes (Forces, Energies, Principles) as Act and Value and Material and Form.

As soon as I read the brief death announcement, I’m transported back to September 1983, as the 12th class of Conway students leave on the ten-day trip to Canada. Eighteen of us, 22 to 50, a range of backgrounds, are looking out the windows of the school van. I, for one, have no idea what I’ve gotten myself into, and how much this year will open up my mind. From the back of the van, Richard Williams poses a question: “What can you see that is not related to landscape design?” After 37 years, I’m still unable to answer that.

Richard’s questions challenged Conway students to think deeply about who we were, what we were learning, and the role of design. Never pretentious or authoritarian, Richard urged us to explore mystery, to embrace contraries, to draw meaning from observations.  He would ask, “When do you know you have entered a place? What creates the boundaries?” Or “What are the most fundamental forces that make anything what it is?”  Once, with a less abstract focus, I remember he asked, “Why do you think the Wares have those old iron wagon wheels leaning against their stone wall?”

In his quiet, introspective manner, Richard Williams pushed us to understand the importance of design. He insisted that we not separate design work from our fundamental convictions; design is an ethical challenge, not one to be determined by aesthetics alone. “How does design illustrate that fundamental relationship (read: struggle) between the individual and the group?”  He asserted there is a point at which one can say this park is well designed because it expresses justice. 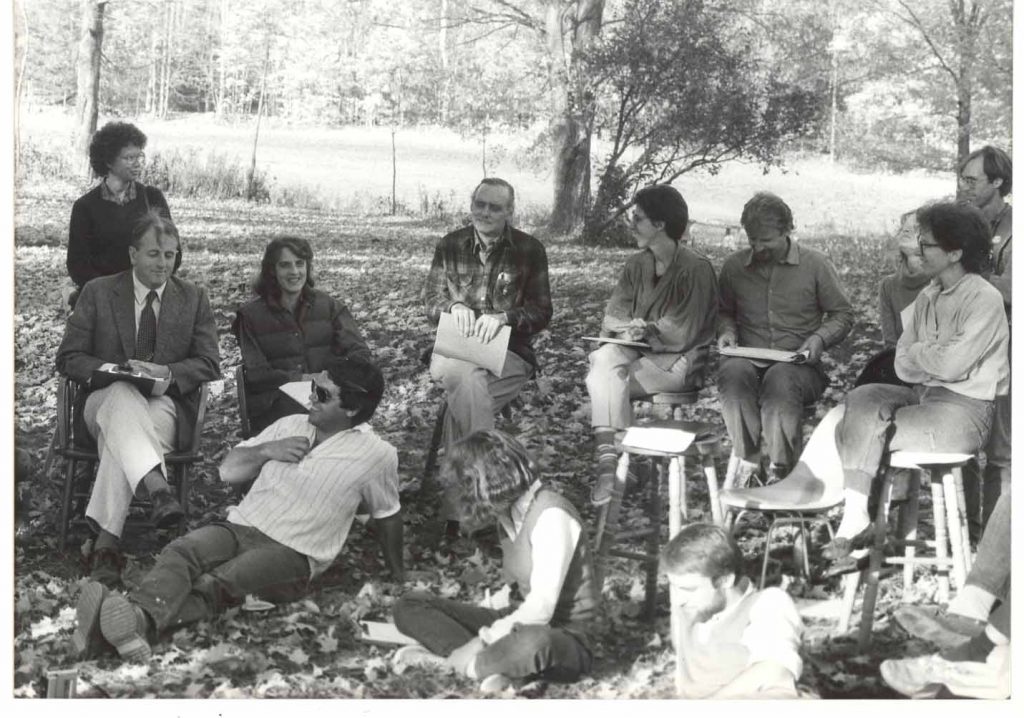 I’ve gleaned some of these quotes from my notebooks, long buried (and moved with me four times since I was a student) to discover his voice, which had such an impact on my thinking at the time. I recognized that many of the things I talk about with current classes—such as searching for a theme, a Big Idea, to bring coherence to a design—I first heard from him. Of course, he said it more elegantly:

“Landscape design is the skill at discovering that all the parts that make up the structure come into an order which is predetermined by a certain function. Design has to do with finding the universal under the particulars that translates units into parts.”

He was talking about relationships, patterns, and coherence—a principle governing the entirety of any design. Where Walt provided the drive, expounding on the principles behind a logical design process; and Don demanded we be thoroughly grounded in the site itself, learning the systems and relationships found in nature; Richard, in his quiet and undemonstrative way challenged us to impart meaning and values to design, to attach feelings to actions, to understand conceptually what a project is to be about.

And always, Richard taught us the power of the well-considered question.

When I attended The Conway School in 1981-82, Richard Williams, the school’s teacher/philosopher of humanities, blew my mind. I mean that in the best possible way. His brilliant observations of what we were intending to do when we intended to design a landscape opened some deep, unexplored—no,  unknown—room in my consciousness, that made me realize how much more, and more consequential, it was for us to engage in the act of landscape design.

Richard challenged me to question my language, my motivations, my understanding of what it means to bring a landscape design into being. My language back then was fuzzy. In one of my projects, I expressed the desire to bring more “energy” into my presentations. In classic Richard style, he evaluated my work on that project by writing that Liz may have a “tendency to feel that energy or enthusiasm or commitment will generate ideas and self-confidence, whereas it may be that seeing clearly is the precondition for these happy experiences.” Richard wasn’t one for psychological reflection, but he had a brilliant laser focus on how the mind operates, and challenged me to think more clearly about what I was doing in the process of designing a landscape.

An object cannot fully be itself until it does what it was meant to do. Man’s appropriate function is to develop the mind until it is co-extensive with the intelligibility of the universe. When he does this, he is making nature more beautiful.

If liberal education is not defined in merely social terms, the fundamental meaning of the phrase is free to emerge.  The question is not, or not merely, what is appropriate to free human beings as opposed to slaves, but what kind of education liberates by fully developing and strongly unifying the human spirit.

One of the most profound lessons Richard taught me was that landscapes are, in addition to their ecological and practical functioning, expressions of human needs and values.  Places generate felt responses.  If the place was a person, how would I feel about him or her?  Does this person invite, or repel?  A well-managed woodlot speaks to us of harmony, of right relationship, of the achievement of highest potential, while a degraded woodlot speaks of neglect, abuse, lack of health.

How do we design for morality? What are the attributes that satisfy? What are the patterns that remind us of oneness? What are the experiences that will bring us to rest, and to the familiarity that makes a space a place? What does it say to us when a home is designed with a driveway and parking space in the front yard? The home is a place of rest, while the car is a vehicle of movement, and that creates a tension.

Richard was one of my greatest teachers, in so many ways. I was incredibly grateful to have had the opportunity to learn from him, and be challenged by him. He made the Conway School education larger and more deeply meaningful for me, and I carry his insights with me to this day.