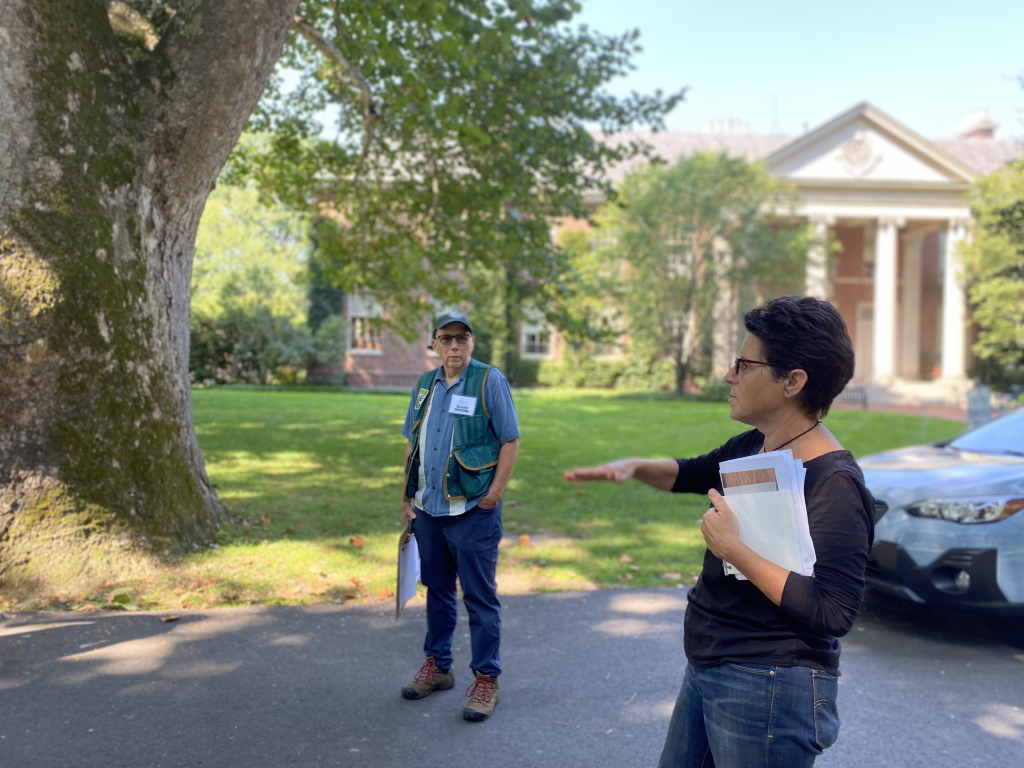 Mary Chicoine ’10 discusses the history of sycamores and other species of the Deerfield region. Photo by Roxy Finn

We could not have asked for better weather for the Legacy Tree visit on Friday, September 9th. As the group of alums, staff, friends, and canine companions gathered at the Sunderland Library during a gorgeous New England late summer morning, also gorgeous were the towering limbs of the sycamore [LATIN ID], a tree unrivaled in girth and age among area species. After a short walk we arrived at Riverside Park, a cooperative project between the Town of Sunderland and the Commonwealth of Massachusetts PARC Program. At the river’s edge, presenters CJ Lammers and Chuck Schnell ’01 led attendees through a whirlwind tour of the ecology in this area. Sandwiched between the Deerfield and Connecticut rivers, it consists of four distinct bioregions which run north-south. Sycamores in particular thrive here: the proximity to water and nutrients supporting their enormous growth, which in turn provides stability to the soil, shade canopy for understory growth, and habitat for many species. 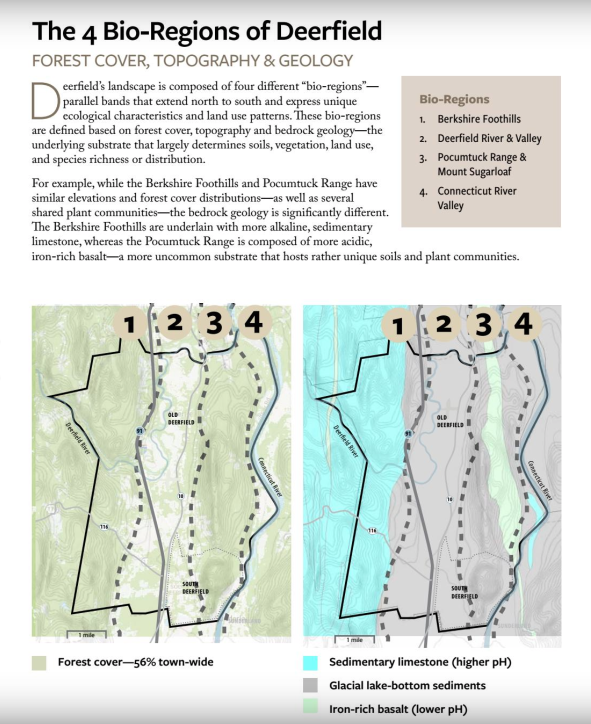 Excerpt from Winter 2018 student project “Ecological Resilience in Deerfield: Trees as Living Infrastructure.” The project – by Johnny Slaff ’18, Sam Freedman ’18, and David Grist ’18  was prepared for the Franklin Regional Council of Governments.

After touring the riparian corridor along the Connecticut, the group traveled to the village of Historic Deerfield, whose main street was once lined with a canopy of elm trees, most which have now succumbed to the elm blight. This prompted a discussion of traditional city planning methods, which will often plant rows of the same tree species along streets, creating easy vectors for disease. We talked about how increasing biodiversity in localized city plantings improves the overall resilience of the ecosystems, and other ways in which trees are incorporated into suburban and urban designs.

Still thriving despite the paved road covering part of its root zone was a large sycamore, which we estimated to be at least several hundred years old. CJ measured its girth at 87 inches – over seven feet around – and reported that this was an increase of several inches since the last time Conway students measured it in 2018. 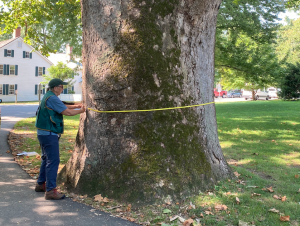 CJ Lammers measures the trunk of a sycamore in the village of Historic Deerfield. Photo by Roxy Finn.

Legacy giants such as this one bring into focus the complex and critical role that trees play in our world. They act as bridges, sometimes literally so as their lengths cross streams and rivers. However, they also colligate more strata of the earth than any other beings, from the depths of soil, rock and lakebed to the highest of canopies. They are the oldest of living souls, spreading across generations and eras and paradigms, in patient observation of lives and revolutions. They thrive across four dimensions, and in doing so have provided food, shelter, fuel, safety, transport, and met a thousand other needs for millions of species over millions of years. They are the slow, quiet miracles of our world, and, when we take time out of our frenetic and short-sighted agendas to see and hear them, it’s astounding what they can teach us.

You can nominate a tree for the MA Legacy Tree Program! Read more>

Please join us for our next Legacy Tree event!