Our Growing Community in Easthampton

by Kate Cholakis ’11 and Ken Botnick ’79
In the fall of 2015, Conway opened a new campus in Mill 180, a former industrial building in Easthampton, MA. The decision to offer students the opportunity to study in a more urban location reflects Conway’s commitment to embrace changes in the environment, the field of design, and growing cities. Although the school has always incorporated a range of urban and rural projects, the new location makes Conway’s unique approach accessible to a wider audience. During the first year at the new campus, the faculty, lecturers, and critics have included alums and old friends of the Conway school as well as new community members. The following piece was written by Academic Coordinator Kate Cholakis ’11 and visiting faculty member Ken Botnick ’79, and published in the spring 2016 issue of con’text. 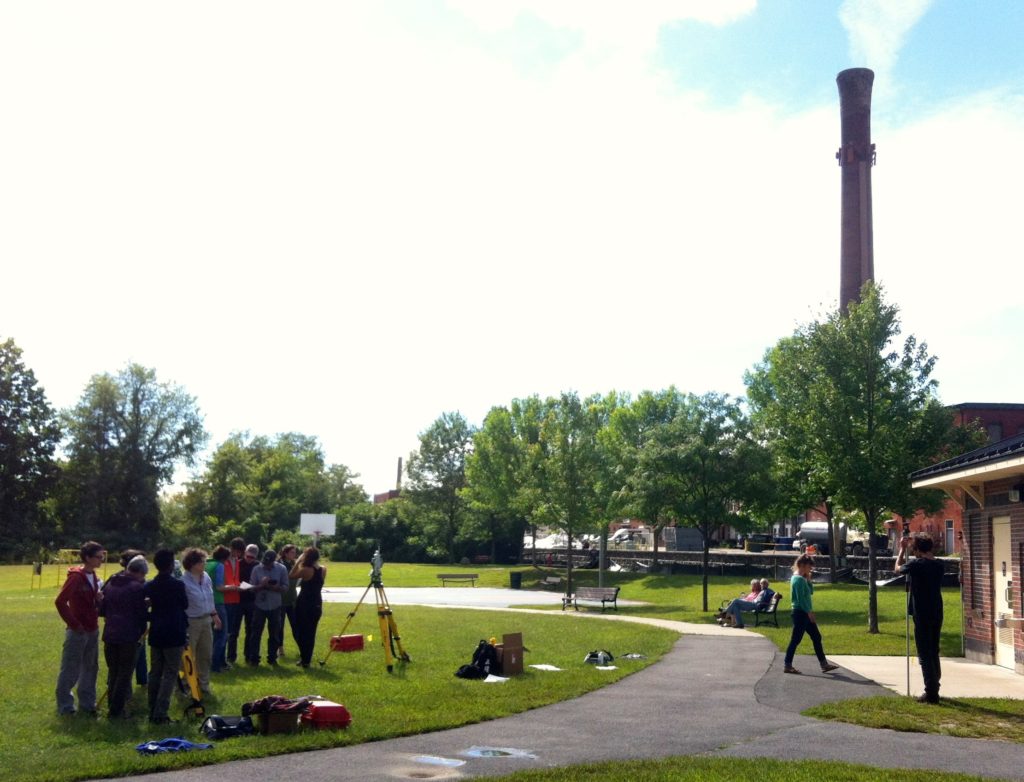 Surveying class in the park adjacent to Mill180.

The Conway School’s Easthampton campus is quickly becoming all that could be hoped for in its urban setting. Students commute daily from a variety of locations in the Pioneer Valley—even from as far away as Hartford. Participation in lectures at local universities, exhibitions, and critiques at venues in the Valley is easier by virtue of proximity, and we have benefitted from the diversity of professionals working nearby. At the beginning of the semester, Emily Holmberg, from Holmberg and Howe Inc., a land surveying and civil engineering firm in Easthampton, stopped by to help students troubleshoot surveying equipment. Our new site-engineering instructor, landscape architect Rachel Loeffler, works primarily at Berkshire Design Group in Northampton. The campus also welcomed visits from professionals living farther afield, such as landscape architect Sue Reed ’87 from Shelburne Falls, conservation activist Edwina von Gal from East Hampton, New York, and landscape designer Maria Lopez Ibanez from North Carolina. 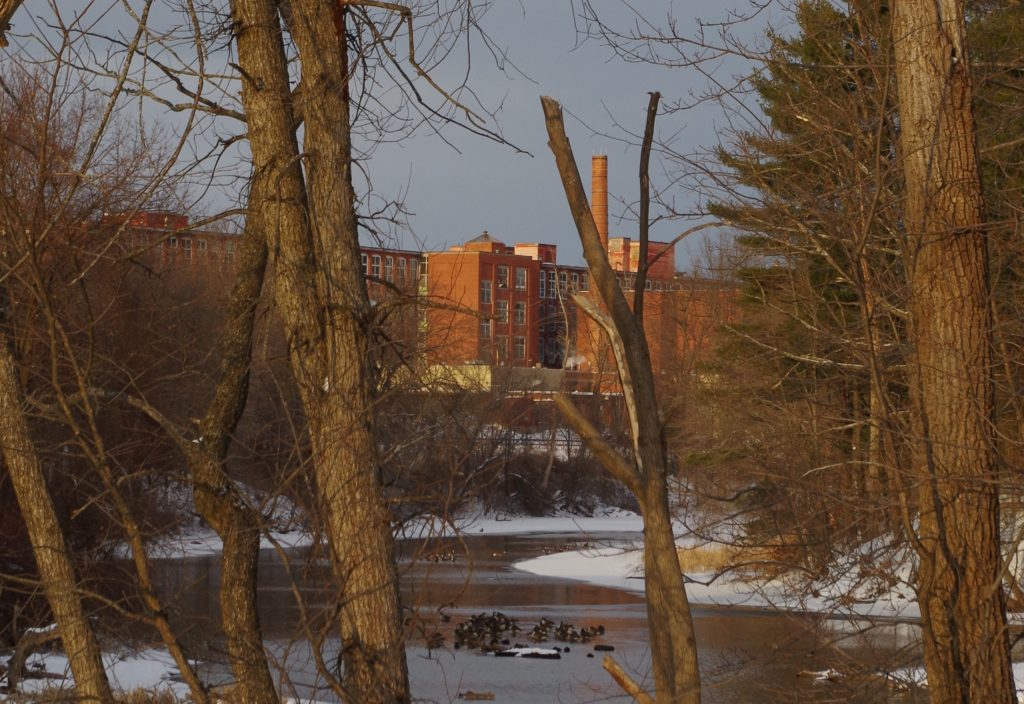 Easthampton offers the opportunity to explore the intersection of heavily built and disturbed industrial areas and wildlife habitat in the adjacent wetlands. Photo by Dave Weber ’15.

Part of the initial vision for the Easthampton campus was to take advantage of the many lessons of urban community and ecology just outside our door, and this has proved successful. Ecologist Richard Forman came to Easthampton for a day in the fall, and after a presentation to students, he led an enlightening walking tour through the surrounding neighborhood. Richard’s insights into plant communities, built infrastructure, and human use patterns raised awareness of the complexity of the interrelated systems surrounding us. 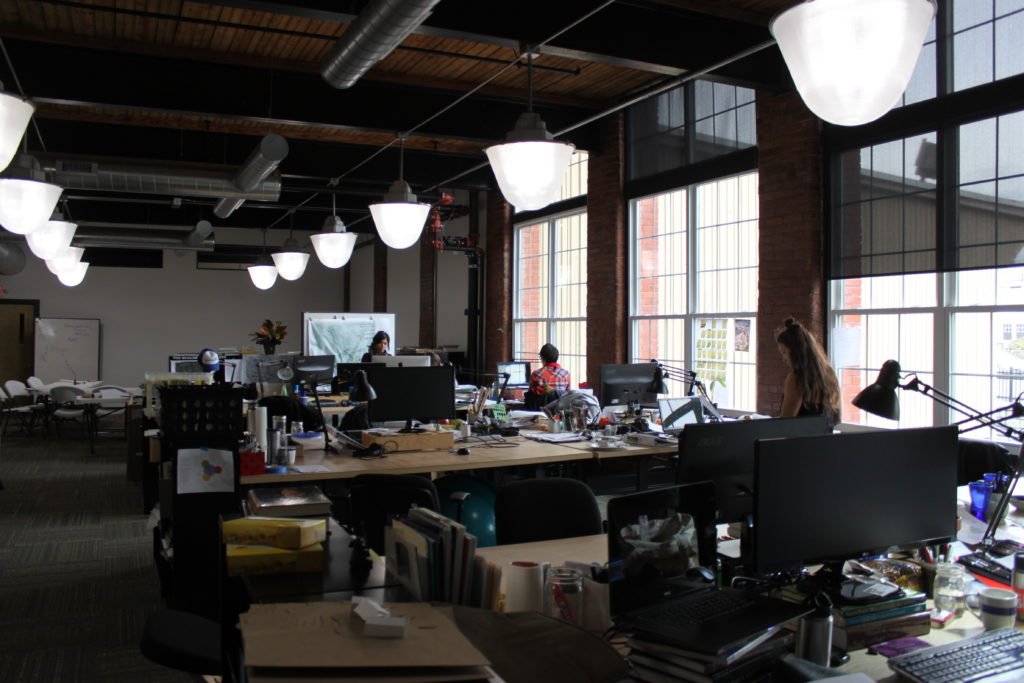 The renovated mill space allows for a spacious and flexible studio, and the large windows provide ample natural light during the day.

Conway’s founder, Walt Cudnohufsky, returned to the school as an instructor for the first time after many years. Walt began his workshop in the immediate neighborhood facing the Mill building. On fast-paced walks, Walt’s genius for using a design vocabulary to explore the environment was eye opening. Along the way, we introduced ourselves to our Cambodian neighbors, who graciously opened the gate to their property that had been turned into a productive and inviting urban farm. Walt continued up the street to the Catholic church and school, where he led a two-day workshop in his low-tech method for creating a base plan by pacing off the property, making educated guesses about sizes and location, and sketching it up on a legal pad. Chuck Schnell ’01 and Mollie Babize ’84 from Walt Cudnohufsky Associates have brought incredibly helpful perspectives in the studio.

On Fridays, field trips have taken the class far afield. One memorable trip was to our neighboring Mount Tom, to meet with geologist Richard Little, historian Robert Schwobe, and Bill Finn of the Mount Tom State Reservation Advocacy Group to learn about the complexities of managing the mountain we are fortunate to look at from the kitchen window of the Mill 180 building. From Mount Tom’s Goat Peak, students could observe the transition from Easthampton’s urban post-industrial landscape to the rural, rolling hills beyond. Although we are in an urban location, students are taught to understand natural systems across the whole rural–urban transect. All of these experiences have brought the surrounding landscape and urban community to life in ways that have enriched our experience of looking at, thinking about, and designing for the environment. 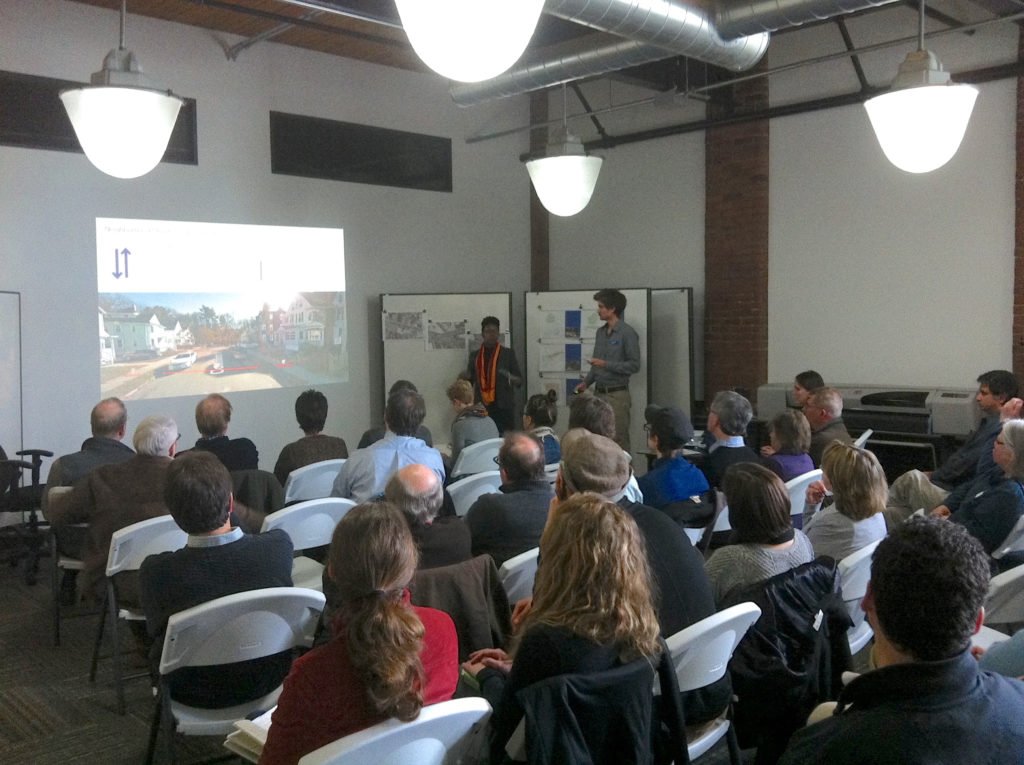 Students Breyonne Golding ’16 and Eric DePalo ’16 present during winter formals at Mill 180.
Our urban campus is newly remodeled to welcome the class of 2017! Visit us or request a catalog for the 2016-2017 academic year.