The Conway School extends a warm welcome to Greg Watson as our 2017 Commencement Speaker. Greg has been a long-time friend of and guest lecturer at the Conway School, bringing his perspectives on food systems, agriculture, economics, and community development to the curriculum. Greg’s work with communities and organizations world-wide integrates climate change science and energy production, food and racial justice, and environmental stewardship. The image above is from a 2015 public lecture in Springfield, MA with Greg Watson and Liz Wills-O’Gilvie from Gardening the Community. 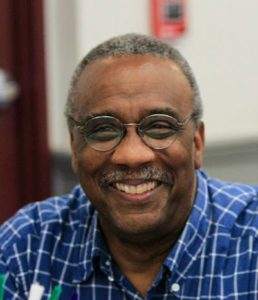 “Greg Watson has been at the forefront of ecological design thinking for his entire career.  Conway School is honored to have him as one of our guest teachers every year, and this year as our commencement speaker.  He brings passion, insight, and creativity to every encounter with our students.  I look forward to the pleasure of introducing him at Conway’s graduation.”  – Bruce Stedman, Executive Director

Greg Watson has spent nearly 40 years working to understand systems thinking as inspired by Buckminster Fuller and applying that understanding to create a just and sustainable world. He is currently the Director of Policy and Systems Design at the Schumacher Center for a New Economics where he founded the Cuba-U.S. Agroecology Network.

In 1978 Greg organized a network of urban farmers’ markets in the Greater Boston Metropolitan Area as part of a comprehensive plan to revitalize the Massachusetts agriculture sector. He would later serve as Commissioner of Agriculture in Massachusetts under Governors Dukakis and Weld from 1990-1993 and Governor Deval Patrick between 2012 and 2014. During the Patrick administration, he launched a statewide urban-agriculture grants program and chaired the Commonwealth’s Public Market Commission, which oversaw the planning and construction of the Boston Public Market. In 1999 Greg became the first Executive Director of the Massachusetts Renewable Energy Trust – a program that finances the development of renewable energy options for Massachusetts ratepayers following the restructuring of the state’s electric utilities. As Executive Director of the Dudley Street Neighborhood Initiative, a multicultural grassroots organizing and planning organization he worked with residents to make urban agriculture a major focus of the community’s revitalization plan. In 2008 Greg served on President-elect Barack Obama’s U.S. Department of Energy transition team. He gained hands-on experience in organic farming, aquaculture, wind energy technology and passive solar design at the New Alchemy Institute (now called the Green Center) on Cape Cod, first as Education Director and later as Executive Director.

Greg serves on the boards of Drawdown, CommonWealth Kitchen, the Urban Farming Institute, Ocean Arks International, Remineralize The Earth and the Interactive Institute for Social Change.